Minister of Youth and Sports, Sunday Dare, has congratulated Nigerian-born UFC middleweight champion, Isreal Adesanya, after retaining his title with a second round knockout of Paulo Costa in Abu Dhabi .

Adesanya made light work of his opponent , dominating the fight from start to finish as he wrapped up business with a knockout of Costa in the second round via punches .
Adesanya was barely touched in the fight and left Costa needing medical attention after the defeat .
Apart from the minister, Chairman, Nigerians in Diaspora Commission , Abike Dabiri -Erewa and other Nigerians, also celebrated the Lagos -born UFC Star .
“ Isreal Adesanya wins again. Second round knockout ! Middleweight Champion of the World ! Nigeria in the podium again. Shout out to Lagos !“ Sunday Dare tweeted .
Dare also congratulated Canadian -born Nigerian fighter Hakeem Dawodu who had earlier defeated Russian Zubaira Tukhugov via split decision to stay unbeaten in nine professional MMA fights in the featherweight division.
“ I also congratulate and celebrate Hakeem Dawodu . Another Nigerian who won his fight this morning before Isreal, ” Dare added .
Chairman , Nigerians in Diaspora Commission , Abike Dabiri- Erewa also hailed Adesanya ’ s feat .
“ Congrats @stylebender . You made it all look so so easy ,” Dabiri- Erewa wrote on Twitter.
Other Nigerians also hailed the middleweight champion for the easy fight despite pundits predicting a tough encounter.
“ Izzy Adesanya knocked Costa out in round 2 of the # ufc 253 . The last style bender is one of the smartest fighters I have ever watched . A win for Nigeria . A win for Africa, ” OB Amponsah tweeted .
“ That left hook right behind Costa ’s ear did the damage . Israel Adesanya is no fluke . No one saw this game ending in round 2 , Naija great ,” @ cktwist 23 tweeted .
“ Israel Adesanya gave a shout out to Nigerians after an “ Izzy ” victory . He never forgets his roots . Congratulations, ” Elvis Tunde reacted to Adesanya ’ s win on Twitter. 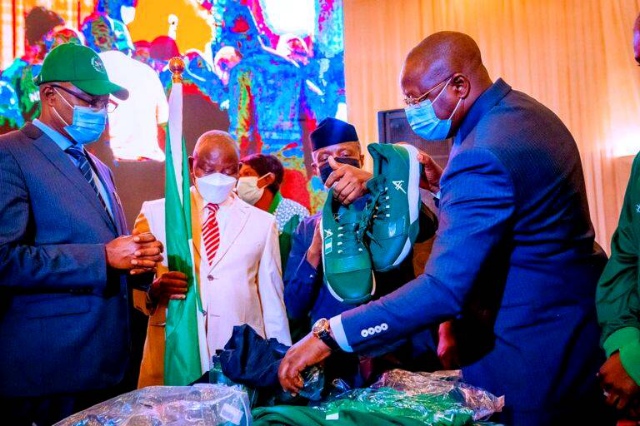 AFA Sports has been announced as the official apparel provider for the Nigerian delegation to the Olympics.

The national apparels were displayed to the world by Vice President Yemi Osinbajo, as he bid the athletes farewell before they boarded their flights on Tuesday to Japan.

The historical deal makes AFA Sports the first indigenous African apparel partner to ever feature at the Olympics.

Announcing the partnership in Lekki, Lagos, Ugo Udezue, the CEO of AFA Sports said, “This is a golden opportunity and a golden moment not just for AFA Sports but also the Nigerian contingent. We are very passionate about the opportunity to represent our country and the African populace.

“We are proud to be actively participating on a global scale and are excited to continue rendering active support to the development of sports, and in particular the Olympic games.

“We are also grateful to the Ministry of Sports for creating an enabling environment for local sports enterprise.”

This partnership is yet another proof of AFA Sports long-standing tradition of support which first began with providing apparel for the male and female national basketball teams to the Afrobasket and the World Cup games, then the male and female Volleyball teams, the Para-powerlifting federation, the first-ever African Knockout involving mixed martial arts and down to local athletes.

As a brand that has been conscientious to the needs of African athletes, just as when it developed the Humid-resist-fabric to keep the body cool in Africa’s extreme humidity, AFA Sports conducted an extensive research on the Japanese climate in order to curate the best performance fabrics for the Olympics team where the margins of success can come down to the athletics products.