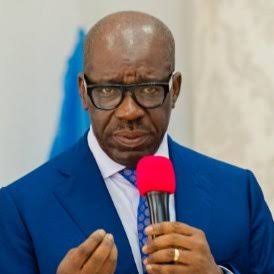 The governor was represented by the Head of Service, Mr. Isaac Ehiozuwa, during the presentation of the cheques to the families of the deceased civil servants in

He said the provision under sections 8(1) and 11(3) respectively provided for the establishment of a Group Life Insurance policy for all employees in the scheme where the sum of three times the last annual salary of a deceased employee is paid to the beneficiaries.

Obaseki noted that the state government implemented the policy to show concern to the families of the deceased civil servants, urging the families to use the money judiciously.

He said, “When somebody dies, he or she is entitled to 300 per cent of the annual salary he or she earned at the time of death.”

Obaseki added that the Group Life Insurance policy is different from entitlements of the pensions and gratuity the civil servants would have gotten at the point of retirement, adding that the programme is designed in a way that immediate succor is provided to the families of the deceased families in the event of death.

One of the beneficiaries, Mrs. Esther Osariemen expressed appreciation to the state government for the gesture, noting, “I was not even expecting any money. I promise to use the money judiciously.”