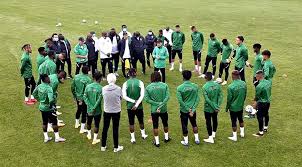 Nigeria’s Super Eagles have dropped by three spots in the October ranking to place 32nd in the world after losing one of it’s international friendly match and drawing another within the period under review.

In the ranking table on the website of the world football governing body on Thursday, Nigeria garnered 1488 points in the month of October as against 1493 garnered in September.
The Eagles had on Oct. 9 lost 0-1 to Algeria in an international friendly match and settled for a 1-1 draw in another with Tunisia on Oct. 13.
The drop in the global spot has also dropped the Nigerian National team to the fourth spot on the continent behind Senegal, Tunisia and Algeria respectively as against the third position it occupied in September.
On the global scene, the podium remained unchanged even as 120 international fixtures were played in the month of October.
Qualifying games for the FIFA World Cup Qatar 2022, the play-offs for UEFA EURO 2021, and UEFA Nations League fixtures were among the 120 internationals played over the last month which resulted in significant movement.
While the podium remains the same, the gap has narrowed between top-ranked Belgium and their immediate pursuers, France and Brazil, following the Red Devils‘ loss to England (4th) in the UEFA Nations League – their first defeat since November 2018.
However, there are changes to the Top 10: Spain (6th, +1) and Argentina (8th, +1) swapped places with Uruguay (7th, -1) and Croatia (9th, -1) respectively.
Further down the classification, Denmark (13th, +3), Algeria (30th, +5), Paraguay (35th, +5), Morocco (39th, +4), Scotland (45th, +4), and Hungary (47th, +5) all progressed, with the Magyars breaking into the Top 50 at the expense of Bosnia and Herzegovina (51, -1).
The biggest climber this month was Malta (180th, +6), who jumped six places courtesy of victories over Gibraltar (195th, unchanged) and Latvia (142nd, -5) and a draw with Andorra (145th, -8). Also worthy of note is the progress of Ecuador (60th, +4), Panama (77th, +4) and Israel (88th, +5). (NAN)