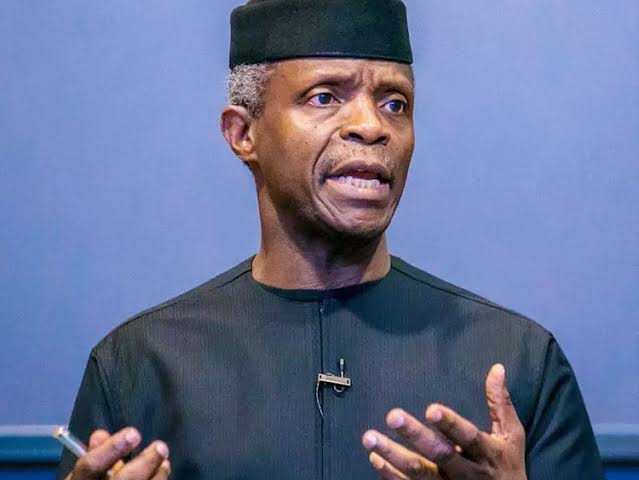 The Federal Government has progressed with payment of N30,000 one-time grants to 333,000 artisans across the country as part of the Economic Sustainability Plan (ESP).
Senior Special Assistant to the President on Media and Publicity, Office of the Vice President, Mr Laolu Akande, in a statement, explained the payments were being made to verified beneficiaries of the Artisan Support Scheme, a track under the MSMEs Survival Fund.
In the first stream of payments starting on Tuesday, beneficiaries are being drawn from the FCT, Lagos, Ondo, Kaduna, Borno, Kano, Bauchi, Anambra, Abia, Rivers, Plateau and Delta States. They form the first batch of applications for the scheme submitted between October 1 and October 10.
The MSMEs Survival Fund scheme is a component of the Nigerian Economic Sustainability Plan (NESP), which was developed by an Economic Sustainability Committee established by President Muhammadu Buhari in March 2020.
The President asked Vice President Yemi Osinbajo to head the committee, which produced and is overseeing the implementation of the plan.
Under the ESP, the Survival Fund is generally designed to, among other thing, support vulnerable MSMEs in meeting their different obligations and safeguard jobs in the sector.
Applications for the Artisans’ Support Scheme under the MSMEs Survival Fund opened on October 1.
Meanwhile, the enumeration for the second stream of States under the Artisan Support Scheme has also commenced with enumerators in various States compiling the lists of artisans through their association leaders.
All artisans are expected to liaise with their association leaders to document their details.
The registration of applicants for Stream 2 began on the 19th October 2020. States under Stream 2 are: Edo, Ogun, Ekiti, Katsina, Kebbi, Kogi, Kwara, Enugu, Ebonyi, Adamawa, Taraba, Bayelsa
In the same vein, enumeration and verification of the documents of applicants under the Survival Fund Payroll Support scheme is still ongoing. Dates for the commencement of payment would be announced in due course.
The application process for the payroll support scheme, which began on September 21, had ended on the 15th of October 2020. Accepted applications are categorized by industry sectors, including Education and Hospitality, among other sectors.
However, there may be an extension for applications for some States that have not met their quota on beneficiaries. The Artisan Support Scheme is to benefit about 9,000 Nigerians per State and FCT.

Mr Saleh Mamman, Minister of Power, says the Federal Government is ready to support any initiative by electricity Distribution Companies (DisCos) aimed at addressing the challenges facing the power sector.
The News Agency of Nigeria (NAN) reports that Mamman spoke at the inauguration of Eko Electric Distribution Company’s (EKEDC) Supervisory Control And Data Acquisition (SCADA) System on Thursday in Lagos.
Mamman said : “I felicitate with and commend the EKEDC’s Board of Directors and management for this milestone.
“SCADA is one of the most advanced technologies in the power distribution business globally and I am optimistic that this event will translate to improved service delivery within EKEDC’s network.
“The inauguration of this SCADA system will help EKEDC monitor and respond quicker to faults and reduce the outage durations which would improve quality of service delivery to customers.”
According to him, the SCADA project will help the DisCo meet its set objectives under the recently executed Service Level Agreements with the Transmission Company of Nigeria (TCN).
He said the project would provide access to real time data that enables distribution system operators to make informed decisions that improve reliability and availability, consistent with the targets of the Service Based Tariff (SBT) regime.
Mamman said the FG was working assiduously to address the challenges of the power sector through initiatives such as the National Mass Metering Programme, the Siemens AG Power Project and upgrade of power infrastructure across the country.
Earlier, Mr Adeoye Fadeyibi, Managing Director, EKEDC, thanked the Central Bank of Nigeria (CBN) for its support to the Nigerian Electricity Supply Industry which paved way for the SCADA project.
Fadeyibi said : “SCADA is a centralised computer system which represents the evolution of our network operations from the present physical monitoring, remote coverage and relay of network information.
“By contrast, SCADA innovatively gathers real time information, identifies loopholes or breaches in the network and transfers this data back to a central site where the necessary analysis and control is carried out.
“The result of this analysis is then displayed in a logical and organised fashion. The project involves monitoring, control, fault tracking, data analysis and operations optimisation of our high-tension network.
“As part of Eko DisCo’s effort to improve operational efficiency, revenue generation and reduction of our Aggregate Technical Commercial and Collection Losses, we have implemented the SCADA project to automate our electric power distribution network across our franchise coverage area.”
He said the achievement by the DisCo showed that the FG’s Power Sector privatisation programme was a laudable decision, as it had completely transformed the sector and the Nigerian Electricity Supply Industry.

Emirates airlines has announced that it will provide travellers a multi- risk travel cover worth $ 500 , 000 on top of its current COVID-19 cover.
The airline stated that the new multi- risk travel insurance and COVID-19 cover will automatically apply to all Emirates tickets purchased from December 1 , and extend to Emirates codeshare flights operated by partner airlines , as long as the ticket number starts with 176.
Emirates Chairman and Chief Executive , Ahmed bin Al Maktoum was quoted as saying , “ Emirates was the first airline to offer complimentary global COVID -19 cover for travellers back in July , and the response from our customers has been tremendously encouraging.
“ We have not rested on our laurels and instead continued to look at how we can offer our customers an even better proposition. We are very pleased to be able to now provide this new multi- risk travel insurance and COVID – 19 cover , which is another industry first, to all our customers.”
He added, “ We aim to give our customers even more confidence in making their travel plans this winter and moving into 2021 by the launch of this feature .”
Highlights of the coverage include out -of – country emergency medical expenses and evacuation up to $ 500 ,000 , valid for COVID -19 ( contracted during the trip ) and other medical emergencies while travelling abroad.
It also involves trip cancellation up to $ 7 ,500 for non- refundable costs if the traveller or a relative ( as defined in the policy ) is unable to travel because they are diagnosed with COVID- 19 before the scheduled trip departure date , or for other named reasons – similar to other comprehensive travel cover products.

The Federal Government said that with the proposed Finance Bill 2020, minimum wage earners will be exempted from the Personal Income Tax in order to reduce the impact of inflation on Nigerians.
The government also said that the exemption and other items in the proposed Bill, alongside various economic policies and incentives would ensure the resilience of the Nigerian economy to exogenous shocks.
The assurance was given by President Muhammadu Buhari in his speech delivered virtually by Vice President Yemi Osinbajo, on Monday at the opening session of the 26th Nigerian Economic Summit Group Conference themed: “Building Partnerships for Resilience”.
President Buhari said, “We are proposing in the new Finance Act that those who earn minimum wage should be exempted from paying income tax.
“These provisions which complement the tax breaks given to small businesses last year will not only further stimulate the economy but are also a fulfillment of promises made to take steps to help reduce the cost of transportation and the impact of inflation on ordinary Nigerians.”
Explaining the role of the private sector in building a resilient economy, President Buhari said “this government has always emphasised that the private sector has a key role to play in our efforts to build a more resilient and competitive economy as expressed in the Economic Recovery and Growth Plan.
“Private companies in design, construction, logistics, and finance are very much engaged in our infrastructural projects in power and rail as well as road and bridges and the installation of broadband infrastructure which is an essential requirement if Nigeria is to participate actively and benefit from the 4th Industrial Revolution.”
Continuing, the President added, “…it is clear that we must diversify the economy away from dependence on crude oil exports, speed up human capital development and improve on infrastructure. Above all, our economy must be made more resilient to exogenous shocks.
“It is important for the private sector to play a key role as we work together to identify national priorities and try to influence our future national trajectory.”
He gave insights into the collaboration between the CBN, the Nigerian Sovereign Wealth Investment Authority (NSIA), and other stakeholders in the creation of an Infrastructure Company (Infraco) Fund to address some of the nation’s critical infrastructure needs.
“It goes without saying that partnerships remain essential to attract the resources for building a solid national infrastructural base. I am pleased to inform you in this regard that we are working actively with the Central Bank, Nigerian Sovereign Investment Authority and State Governments under the auspices of the National Economic Council to design and put in place a N15 trillion Infraco Fund which will be independently managed.
“The Infraco Fund will help to close the national infrastructural gap and provide a firm basis for increasing national economic productivity and growth,” the President explained.
Restating the commitment of his administration to sustaining collaborations with the private sector in addressing challenges, President Buhari said “if there is one single lesson to be learnt from the COVID-19 pandemic, it is that partnerships are essential for credible responses with lasting effects.”
According to him, “Our national journey to economic prosperity is a long one, so we must all certainly work together. As we saw, partnerships were essential when we were faced with the serious challenge of combatting COVID-19.
“We saw the key role that partnerships played in our national effort to combat the COVID-19 crisis. While Federal and State Governments worked together to manage the health response and ensure the establishment of isolation centres and availability of test kits, personal protective equipment, and medicines, the private sector also played an active role as individual entities, and also worked together in groups like the Coalition Against COVID-19.”
During the speech presentation, the Vice President responded to the issue of import duties raised by some speakers at the summit. The Vice President noted that “the point of the reduction in levies on motor vehicles, commercial vehicles for transportation is to reduce the cost of transportation by reducing the cost of vehicles.”
He explained that “with subsidy removal and the increase in fuel price and the pass-through to food prices, transportation costs had to be reduced. Now the automotive policy is directed at localising the production of vehicles. So the logic was to increase the duty and levies so that local production becomes more competitive. But the annual demand for vehicles is about 720, 000 vehicles per year. Actual local production is 14,000 vehicles a year.
“So, the problem is that at the current rate of production, we will not meet the serious national needs and this will just mean higher prices of vehicles and greater strain on other sectors of the economy that depend on transportation. But we are not giving up on the local auto industry.
“Two important things to note; the first is that we still have a relatively high duty at 35%, so there is still a disincentive for importation. Second is that we are promoting policy that the government must buy only locally manufactured cars.”
The opening session of the summit featured presentations by speakers including Chairman of the Nigerian Governors Forum and Governor of Ekiti State, Mr Kayode Fayemi; Governor Aminu Bello Tambuwal of Sokoto State; Chief Executive Officer of MainOne, Ms Funke Opeke; and the Chief Executive Officer of GIG Group, Mr Chidi Ajaere; among others.