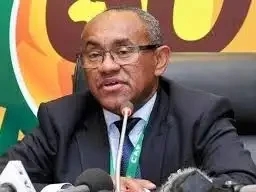 CAF President Ahmad Ahmad announced Wednesday that he will seek a second term as president of the Confederation of African Football despite having faced questions over financial irregularities, all of which he has denied.
“ The @ CAF _ Online knew a lot of improvements for 4 years. I ’m proud of my team ’ s achievements ,” the 60 – year -old tweeted .
“ I extend my thanks and gratitude for your support and assistance in the # football in # Africa and beyond . After reflexion and consultation process , I decided to stand for re – election .”
Earlier this week , it was revealed a letter sent to Ahmad from 46 of CAF ’s 54 member associations had requested him to run for a second four -year term .
Philip Chiyangwa, president of southern African football body COSAFA , confirmed to AFP that a letter supporting Ahmad had been delivered to the former Malagasy politician .
The presidential election is scheduled for Rabat next March.
A simple majority — 28 votes if each association participates — is required to win the election but no official has announced their candidacy .
Algeria , Botswana , the Ivory Coast , Nigeria , Sierra Leone , South Africa , Uganda , and Zimbabwe were the eight nations not included in the letter of support .
Ahmad scored a stunning victory three years ago over incumbent Issa Hayatou , a Cameroonian who had ruled African football for 29 years.
The letter praised Ahmad but made no mention of various controversies surrounding him, including being probed by the FIFA ethics committee for alleged financial irregularities , which he denies .
At the request of Ahmad , FIFA sent secretary general Fatma Samoura to CAF headquarters in Cairo last year to assist for six months in the running of the organization .
( AFP )

Related Topics:CAF President Seeks Second Term Despite Controversy
Up Next