The Independent National Electoral Commission (INEC) said it has resolved to pioneer electronic voting in the country by 2021, as it intends to be using more technological tools in discharging its mandate going forward.

INEC disclosed this in a 17-page document released Monday in Abuja which was tagged, “Policy on Conducting Elections in the Context of the Covid-19 Pandemic”, and signed by its Chairman, Prof. Mahmood Yakubu.

The Commission stated that it would suspend the Continuous Voter Registration CVR due to the Covid-19 pandemic while by 2021, it would pilot the use of electronic voting in the country.

The policy states that INEC shall; “Suspend the Continuous Voter Registration CVR for the time being to prevent the health risks associated with it in the context of COVID-19. Continue to make available its electronic channels for voters to check their registration status.

“Pilot the use of Electronic Voting Machines at the earliest possible time (not Edo and Ondo), but work towards the full introduction of electronic voting in major elections starting from 2021”.

The electoral umpire also decried the rising cost of elections in the country, saying it would be liaising with the National Assembly to see how political parties can nominate replacements for dead representatives in line with a Supreme Court judgment that votes belong to the parties and not individuals.

INEC said its records showed that it is only in 10 percent of all bye-elections conducted since 2015 that the party which originally won the election went ahead to lose, saying it would engage federal lawmakers and other stakeholders to explore ways of defraying the costs associated with bye-elections.

“As already announced by the Commission, the dates for the Governorship elections in Edo and Ondo States remain 19th September 2020 and 10th October 2020 respectively. Dates for the four postponed bye-elections in

Bayelsa, Imo, and the Plateau States, as well as other bye-elections that become due during the COVID-19 pandemic will be announced by the Commission following its established procedures.

cost of conducting frequent bye-elections, especially in consideration of the Supreme Court position that votes belong primarily to political parties, as

well as the Commission’s records, which show that only in 10% of all bye-elections since 2015 did the party that won originally lose the election.

“The Commission will engage relevant authorities, including the legislature, to designate election as an essential service to enable the Commission function effectively in times of national emergency”, INEC said in the policy.

Related Topics:INEC To Start e-Voting In 2021Seeks Cancellation Of Bye-Elections
Up Next

ASUU To FG: Raise Funds For Education Like You Did For COVID-19

WHO Suspends Trial Of Hydroxychloroquine Over Safety Concerns 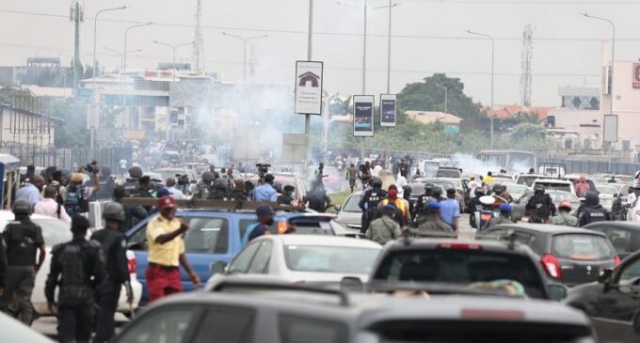 The protest to commemorate #EndSARS first anniversary took a different turn as the police fired teargas at protesters at Lekki tollgate in Lagos.

Nigerians in Lagos, Abuja and some other states poured into the streets on Wednesday to mark the first anniversary of the #EndSARS protest.

The #EndSARS protest of October 2020 was a campaign against police brutality, harassment, extortion and extrajudicial killing by the special anti-robbery squad (SARS).

Speaking to journalists shortly after, Hakeem Odumosu, Lagos commissioner of police, said the protesters told him they were going to end the demonstration by 10 am.

Odumosu said any protest beyond the agreed time is constituting a nuisance.

“I discussed with them and they said they will end the protest by 10 o’clock. Any other person doing it now… that’s nuisance…. that have guns, the ones with machete, hammer, are they protesters or miscreants?

“The protesters are free; they have done their thing and left. Any other person remaining are the miscreants, hoodlums that want to capitalise on that to attack innocent people and start robbing people. We will not allow that.”

The CP also confirmed the arrest of a journalist and said he has ordered his release.