Alexander Hleb might not be the first name that springs to mind when you think of the 2006 Arsenal team which came so close to winning the first Champions League trophy in club’s history.

But it was Arsenal where the versatile Belarusian midfielder played the best football in his career – and eventually earned himself a £12million move to Pep Guardiola’s Barcelona in the summer of 2008.

Yet what would be a dream move for most players turned out to be an utter disaster for Hleb, who spent just one year at Barcelona before leaving loan to Stuttgart and never returning to Spain.

“It’s still difficult for me to explain why I left Arsenal,” Hleb says. “I was absolutely happy there. Arsene completely trusted me, it was idyllic. And then I decided to leave.

“I was on vacation and agents and managers convinced me that I had to go to Barcelona. To be honest, I didn’t really understand what I was doing. At some point, I realised, ‘Oh god! I’m leaving Arsenal!’

“When Arsene said that it was a matter of hours, I felt devastated. It was really hard for me to accept that. Wenger did everything to make me stay at Arsenal.

Hleb reckons he is one of many players who’ve regretted leaving Arsenal and Wenger behind over the years, but his relationship with the Gunners boss survived the transfer.

“Yes, we even met in Minsk a few months ago when Arsenal played against BATE in the Champions League,” Hleb says. “Wenger is like a father to me. It was really easy to work with him, you always felt his support.

“During my first season in England, I picked up in injury while playing for the national team. So, as I was trying to recover from it, I told Arsene that maybe it would make sense to send me on loan to Germany or something.

“He was like, ‘Stop it! I believe in you! Don’t even think about things like that.’ Honestly? I just flew out of the room. It really felt like I had wings.

“Arsene truly feels his players. He says exactly what a player needs to hear. I think there are very few guys who might say that they haven’t enjoyed working with him. Everyone felt like they would get a chance. And I think most players who left ultimately regretted it.”

Hleb moved from Stuttgart to Arsenal in 2005, a year after the Invincibles wrote their way into Premier League folklore.

It would have been hard for anyone to get into a starting XI featuring players like Thierry Henry, Robert Pires and Dennis Bergkamp, but a 24-year-old Belarusian who didn’t have any Premier League experience and couldn’t understand a word of English? Imagine that.

“When I first came to London, the first team was still on vacation because they finished the season a bit later than I did in Germany,” Hleb says. “So, during my first days at Arsenal, I was mainly surrounded by youngsters.

“Everything was great although I got really upset when I found out that Patrick Vieira was leaving. I mean, I just came there and one of the greats was already on his way out.

“Then the first team came in, but I couldn’t speak to anyone because I didn’t know English! And all the main guys spoke either English or French. The only two players I could really chat with were Jens Lehmann who obviously spoke German and Philippe Senderos who spoke six languages.

“Then the club gave me a teacher and it all worked out well, but I definitely had to train very hard because Premier League football was extremely intensive, much more intensive than it was in Bundesliga.

“We played one-touch football and you had to make a decision before you even got the ball. You need time to adapt to that. Fortunately, I had Arsene who really believed in me so after six months or so I felt completely settled and ready to go.”

Related Topics:Alexander Hleb: I Cried Over Arsenal Exit; Most Players Regret Leaving
Up Next

Tokyo 2020 Olympics May Be Cancelled – IOC Tottenham Hotspur have announced Antonio Conte as their new manager — less than 24 hours after the sacking of Nuno Espirito Santo.

The club announced Conte’s appointment in a statement released on its official website on Tuesday.

The Italian, who had been out of work since he parted ways with Inter Milan in the summer, is now back in the English Premier League (EPL) to take over the reins at the White Hart Lane.

The statement revealed that Conte, who won the EPL with Chelsea in 2017, had penned a deal that will see him lead Spurs till 2023.

“We are delighted to announce the appointment of Antonio Conte as our Head Coach on a contract until the summer of 2023, with an option to extend,” the statement read.

“Antonio has won titles in Serie A, including a hat-trick of Scudettos with Juventus, the Premier League and also managed Italy, leading the Azzurri to the quarter-finals of Euro 2016.

“Born in Lecce, Antonio began his playing career at his hometown team (1985-1991) before achieving legendary status at Juventus (1991-2004). A midfielder, he won five Scudettos with La Vecchia Signora, the UEFA Cup in 1993 and the Champions League in 1996. He earned 20 caps for Italy and was part of squads that achieved runners-up status in the 1994 World Cup and Euro 2000.

“Antonio began his coaching career as an assistant in Siena in 2005 and had spells at Arezzo, Bari – where he won Serie B – and Atalanta before returning to Juventus in 2011. He won the title in his first season, 2011/12, completing the campaign unbeaten and equalling a club-record 28-match unbeaten run set by Fabio Capello. He completed a hat-trick of titles with success in 2012/13 and 2013/14 when Juve amassed a Serie A record of 102 points.

“Antonio took charge of the Italian national team in 2014 and led them to the quarter-finals of Euro 2016, topping their group and beating Belgium and Spain along the way.”

Conte won Serie A with Inter Milan last season before departing, reportedly due to issues with the club’s hierarchy.

“I am extremely happy to return to coaching, and to do so at a Premier League club that has the ambition to be a protagonist again,” Conte said.

“Tottenham Hotspur has state-of-the-art facilities and one of the best stadiums in the world.

“I can’t wait to start working to convey to the team and the fans the passion, mentality and determination that have always distinguished me, as a player and as a coach.

“Last summer our union did not happen because the end of my relationship with Inter was still too recent and emotionally too involved with the end of the season, so I felt that it wasn’t yet the right time to return to coaching. But the contagious enthusiasm and determination of Daniel Levy in wanting to entrust me with this task had already hit the mark. Now that the opportunity has returned, I have chosen to take it with great conviction.”

Nuno was sacked by Tottenham on Monday after failing to produce the type of football that births convincing results. 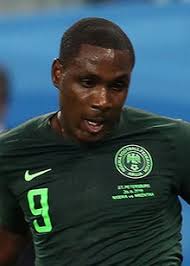 Gernot Rohr has included Odion Ighalo in the Super Eagles final squad list for the 2022 World Cup qualifiers against Liberia and Cape Verde later this month.

Ighalo had announced his retirement in 2019, shortly after picking up the golden boot at the AFCON in Egypt.

But last week, Rohr had revealed that he included the 32-year-old in the Eagles provisional squad for the next World Cup qualification fixtures.

The revelation has spurred an avalanche of criticism among fans and former Nigerian footballers.

Mutiu Adepoju, former Super Eagles forward, said the Franco-German has no reason to recall Ighalo back to the team as other young strikers have stepped up since his retirement.

“I like Ighalo as a player and he is a very good striker. He retired from the Super Eagles about two years ago and I believe we presently have strikers that are good enough in the team,” he had said.

“If we have players! Who are doing very well and scoring goals in their clubs, do we still have to recall Ighalo? It’s just my opinion.”

Despite the backlash, Ighalo has been named in the final Eagles squad list, which was released in a statement on Monday.

Wilfred Ndidi and Alex Iwobi will also be returning after being sidelined from the last two matches of the qualifiers with injuries.

Samuel Chhukwueze was handed his first Eagles call-up since May when he damaged his knee in Villareal’s Europa League game to Arsenal at the Emirates.

Super Eagles will face Liberia on November 13 before hosting Cape Verde three days later as they push to book a place in the final round of qualifiers for the Qatar 2022 World Cup.